You Better Watch Out.... 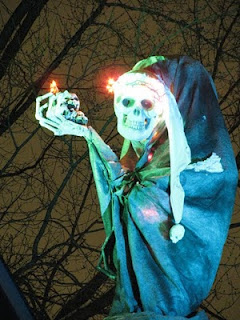 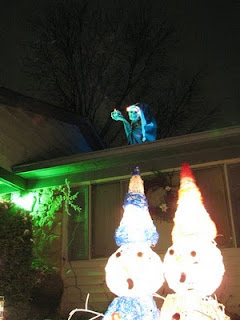 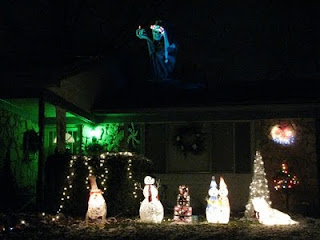 Due to the fantastic response to my previous post, Mr. Sandman gets to spend the next few weeks "up on the rooftop". It is interesting that I have never been able to really capture how enormous and imposing he looks up there. The last picture gives a pretty good feel for the scale of this behemoth.
I hope he doesn't have a craving for venison.
Have a great Christmas!
Posted by Dave the Dead at 7:28 PM 8 comments

Email ThisBlogThis!Share to TwitterShare to FacebookShare to Pinterest
Labels: giant skeletons on the roof, photos, props

What is wrong with me?

My wife has mentioned several times that I should put my Halloween prop "Mr Sandman" up on the rooftop for Christmas....and yet he is still tucked away in the shed with the rest of my Halloween stuff. I am stunned that she would even mention this ( although I believe her ulterior motive is to get me to make adjustments to our TV antenna while I am up there)
I should be jumping at the chance to set him up off-season, and for some reason I can't bring myself to do it.

Have I lost my touch? Am I worried about offending someone? Am I just being lazy?

So what do you think? Should I put him out or not? It's all in your hands people...if there is enough response to set him up, I'll do it. Otherwise, Mr. Sandman stays in the shed until next October.
Posted by Dave the Dead at 7:59 AM 14 comments

Clink, the parting of a friend 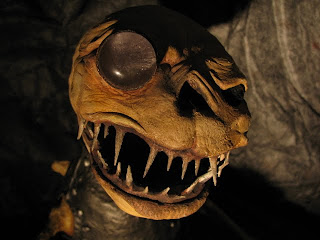 After many years, I have decided to offer Clink for sale on Etsy. He has been one of my favorite sculptures, and has watched from a shelf in the shop as I have spent hundreds of hours ( maybe thousands) making and designing strange and dark creatures of all varieties. I will be sad to see Clink go, but hope he finds a new home where he will be enjoyed by a new owner.
Clink is a very ancient and rare animal, belonging to a captive species that is solely responsible for the upkeep and maintanence of The Machine. With tiny nimble fingers and toes, he is well suited to the detailed work necessary of machining and replacing the brass cogs, gears, springs,and chains that keep The Machine operating. Always the pragmatist, Clink has removed his own leathery wings by gnawing them to the bone...they only got in his way anyhow. He has fashioned himself a metal suit as protection against the whirring and spinning mechanisms, and has implanted a magnification monacular device in his eye to help with the detailed work that is his forte. The Master Elder, having given repeated warnings against his miscievous behaviours, escape attempts, and tendency to bite anything that comes in his way, has permanently fitted Clink with a leg shackle. This hardly slows Clink down, for he has a very strong will and is determined to eventually wreak havok on The Machine that has held his race captive for so very long. 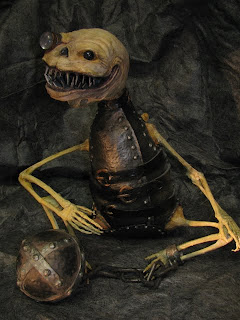 Christmas Goblins, last of the series 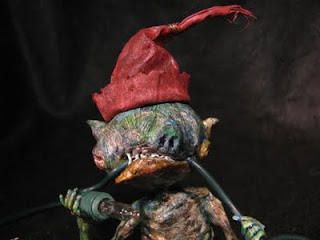 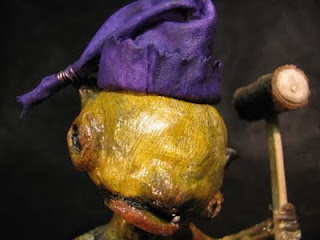 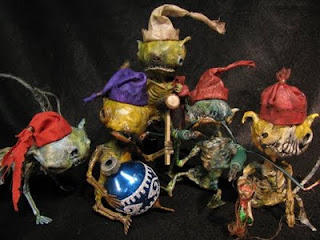 I have just finished the last two pieces in my Christmas Goblin Series. It has been much fun making these little guys. I have enjoyed the challenge of working in brighter colors but still trying to maintain a creepy atmosphere. Multiply moods has always held a certain fascination to me. Now that I have wrapped up this group, it will be on to other projects.
Hurry over to my etsy store to get a Goblin before they are all gone! Free Shipping thru Dec 12th! 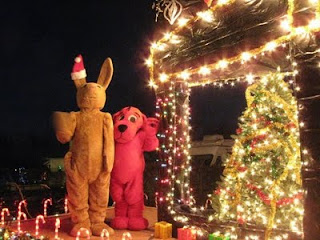 I helped with a parade float last weekend. Here we see Clifford and the Velveteen Rabbit sharing the holiday cheer.
.
.
.
.
.
And then the unthinkable happened..... 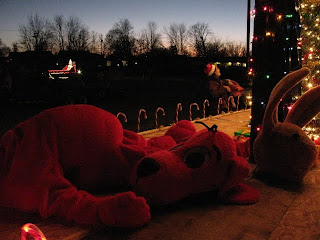