Poor Wendell needs a home. He was born and raised in the pumpkin fields of The Shadow Farm, but now longs for something more. His low set, sad eyes and sickly skin tone tell a tale of loneliness, as all his "normal" brothers and sisters with bright orange colors have already been taken to new homes to celebrate the upcoming Halloween. 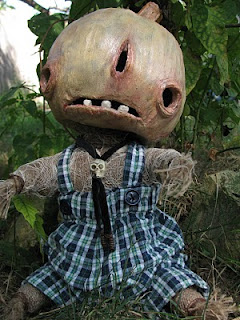 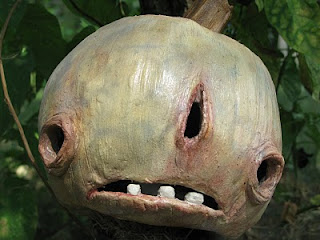 Wendell is one of the very few 'intentionally cute' pieces that I have made. It was a fun challenge to apply a sickly, unwholesome skin tone and red swollen eyes while still maintaining a certain quality that begs to be picked up and hugged. Wendell is available for adoption on Etsy with free shipping.
Posted by Dave the Dead at 3:37 PM 6 comments

Free shipping on all items in my Etsy Store! Click the link or check out the store box to the right of this post for a preview of my items. Now is a great time to grab that item you have been drooling over... a perfect way to jumpstart your Halloween decorating!
Posted by Dave the Dead at 10:41 AM 0 comments

Email ThisBlogThis!Share to TwitterShare to FacebookShare to Pinterest
Labels: etsy

The sudden thud in an otherwise quiet house startled me. It came from the back patio door, and I quickly deduced that a bird had flown into the glass. Sure enough, a small sparrow sat dazed just outside the door in shock from the sudden impact. I watched it for a few moments, and felt the urge to pick up the helpless creature to give it comfort. It was clearly disoriented, but didn't flee when I reached down and cupped it's small body in my hands. It was warm and breathing very rapidly as I stood up to find it a safer place to recuperate.
It was then that the unexpected happened. My field of vision narrowed, first blurred and then becoming darker from the outside in, as if I were entering a dark tunnel. All sounds became muffled until the only thing I could hear was a steady static drone, like the noise of a raging waterfall just out of sight. Even with the strangeness of these sensations I was calm, and became very intent on watching the small bird in my hands. I could feel its chest expand and contract with every single breath it took, and suddenly became aware of a change in the creature. Time itself sped up, like a cheap time lapse effect in a B movie. The bird's head went limp, its eyes glazed over, and it's entire body began to squirm with a knotted mass of maggots. Maggot became housefly, and the remains of the bird reduced to feather and bone in the flash of an instant. Feathers drifted away as if lofted by a sudden breeze, and bone became dust, sifting through my fingers like sand in an hourglass. Dust became molecule, and I could sense the essence and spirit of the creature all about me, a tiny soul freed from a carnate prison. I rejoiced as the molecules effervesced around me, realizing that as the bird had been set free so would I upon my doom. The particles that define me are the same that had defined the bird, and will exist in eternity. Every creature, every object, every thought and breathe exist as one spectacular universal consciousness, and while the form may change, the essence remains in each of us.
I found myself crying, holding the small sparrow as the familiar sounds of the world around me returned. I released my grip, and the bird took flight, landing on a small branch above and looking back at me with a piercing, quizzical gaze. Had it experienced the same vision that I had? Given the content of the hallucination, I feel it most definitely had shared the journey. It threw its tiny head back in song, then flew away into the darkening skies of the evening.
Posted by Dave the Dead at 3:27 PM 1 comments

Email ThisBlogThis!Share to TwitterShare to FacebookShare to Pinterest
Labels: stories 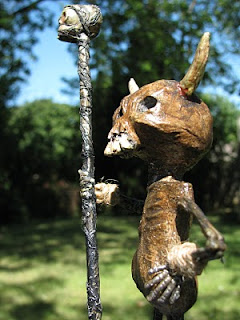 He is a proud little demon.
And why not? He is the master of all he surveys, controlling every little corner of his private underworld. He finds solace in the natural order of chaos and destruction. All the bones have been placed exactly as he wants them, all the souls condemned to torture for eternity under his watchful, vacant eyes. He may only be a lesser imp, patrolling the backyards of suburbia, but he still takes his job seriously. 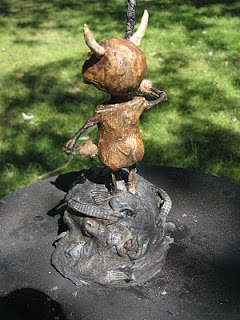 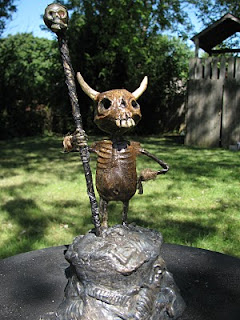 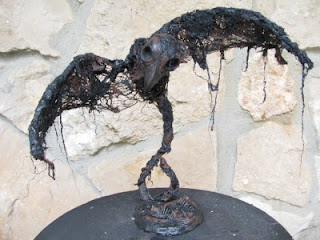 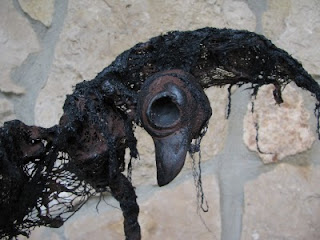 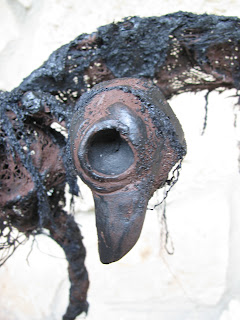 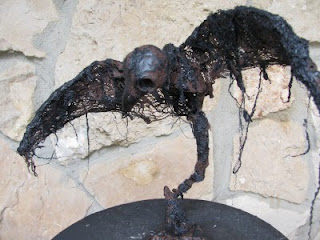 He has seen too much of this world. The sins he has heard and seen disgust him and weigh heavy on his soul. Yet the Bishop plods onward. He has seen too much. When one crosses a certain line of faith and belief, it is impossible to cross back. Bishop now exists on the other side of that line, haunting the halls of the Shadow Farm chapel. 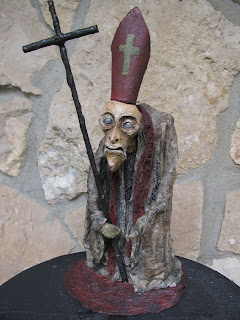 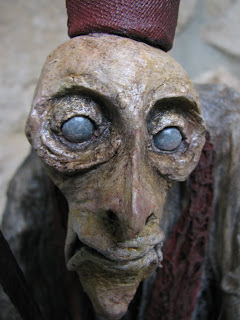 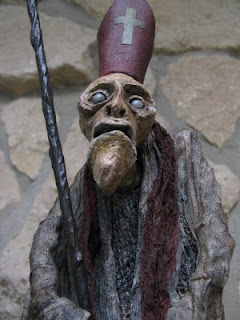 Poor Bishop looks forlorn as he waits in line to be finished. Below he has donned a foil smock to protect his robes as he undergoes the first of many layers of paint. 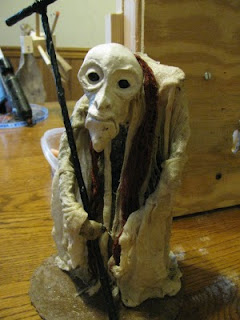 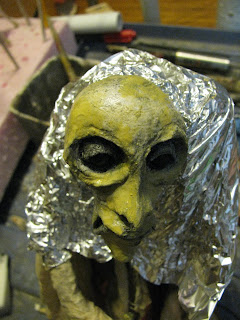 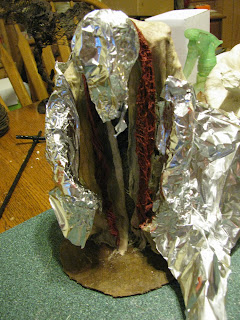 This is a piece I have been working on for a while in between other projects. I just had to snap a picture last night when I carefully added his stole, dripping wet with a glue and paint mixture.
Posted by Dave the Dead at 4:14 PM 4 comments

Rising from the destruction of a man made disaster, the Tar Phoenix is a study in grace, beauty, horror, and recovery. 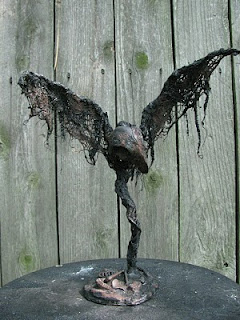 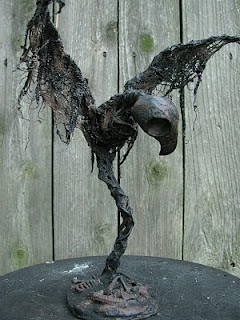 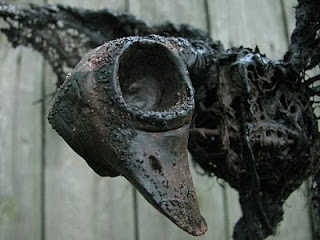 A while back I posted a few of my irrational fears. metal awnings...emery boards...cuttle bones...I am shuddering just thinking about them. They still make me cringe and want to roll up into a tight little wad in a corner somewhere. As bad as these things are, I have come to realize that I have another fear that presents itself several times a week...tweezers.

Yes, I know it is silly, but for some reason there always seems to be a pair of tweezers on the floor of my bathroom...and for some reason I KNOW that I am going to step on them, impaling them bone-deep into the end of my big toe. Every single time I see a pair of tweezers on the floor they mock me. I immediately visualize the shiny metal jutting out of my flesh, the searing pain in my foot, and the gushing blood. It has never happened before to me or anyone I know, but I am sure that one day when I have let my guard down it will.
Posted by Dave the Dead at 7:28 AM 7 comments

Email ThisBlogThis!Share to TwitterShare to FacebookShare to Pinterest
Labels: phobias

Real life, that is...I have been thrown off track lately with a series of irritations that seems to be keeping me from working on my creepy little beasties. Lately it seems to be one thing after another keeping me away from the dungeon...don't give up on me though...I am clawing my way back into the mix.

Currently in the works:

Two commissioned pieces for Etsy customers
a tiny skull with a ridiculously happy grin
the finished Tar Phoenix waiting for pictures
a scowling Bishop with a thing for sushi
a very sad, very young pumpkin creature
assembling a beta test kit of the Heresjohnny Wallbreaker Ghost

While I am on the subject, if you haven't seen Johnny's Wallbreaker Ghost prop, you simply must go check it out. He has put an extreme amount of time into a super-cool Halloween prop, and has also written one of the most detailed how-to's I have ever seen. Johnny's Ghosts is a site to watch for ingenuity and cutting edge mechanical props.
Posted by Dave the Dead at 9:39 AM 2 comments