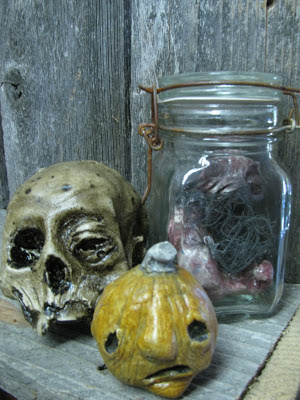 July is nearly upon us, which means it is time to get busy building new Halloween props! In order to get everyone thinking spooky thoughts, I'm running a quick contest and will be giving away the three handmade items pictured on the right.

here's how to enter:

This contest will run until July 7th, with three winners announced on July 8th. Winners will be chosen at random using the highly scientific 'name out of a hat' method.
Posted by Dave the Dead at 9:42 AM 35 comments 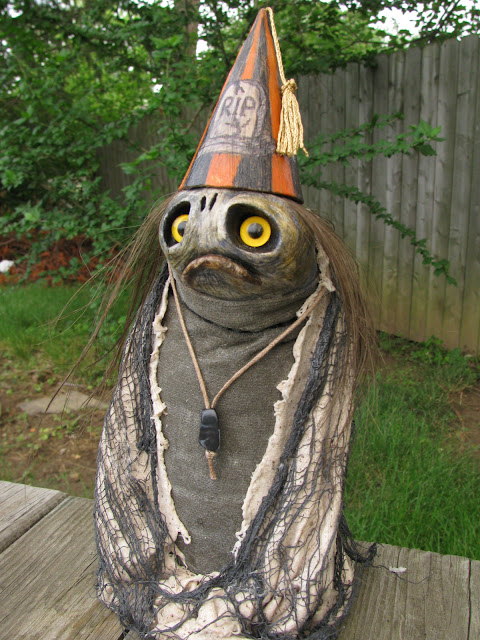 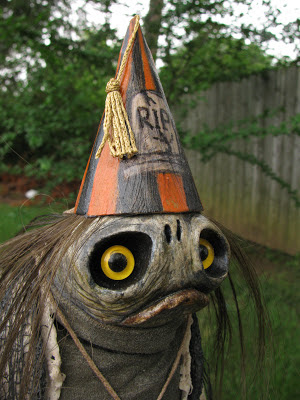 Most people are familiar with the phrases 'Heavens to Betsy" or the less common "Heavens to Murgatroid." I'll bet you didn't know that both are referring to the same person! Betsy Murgatroid was a very awkward and lonely little girl who lived near The Shadow Farm. She was always an outsider, mostly because of her greasy hair, dumpy physique, and bad breath. She had a  peculiar habit of playing pranks on nearly everyone she came in contact with in an attempt to gain popularity through humor.  Was your catsup spiked with Tabasco sauce? Betsy Murgatroid. Shoelaces tied together while you snoozed on the bus? Betsy Murgatroid. Exploding caps trip wired to the toilet seat? Yep...Betsy Murgatroid.

Most people hated her, but all she ever wanted was attention. She just wanted a friend, and thought her pranks would make people like her. 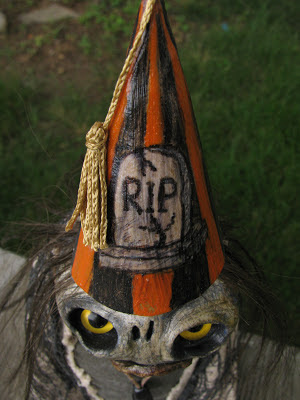 As time went by, the phrase of surprise "Heavens to Betsy Murgatroid" (or versions thereof) became commonplace.  Mostly, her pranks were good-natured and harmless.


Mostly....as the phrase took roots, Betsy found herself becoming more and more isolated and more and more resentful that she couldn't find a friend. One day she snapped, and her innocent jokes took on a whole new flavor.

Fun-loving, socially awkward Betsy Murgatroid is not a pleasant little girl when she gets mad. Oh, no...she is not pleasant at all.
Posted by Dave the Dead at 8:40 AM 9 comments 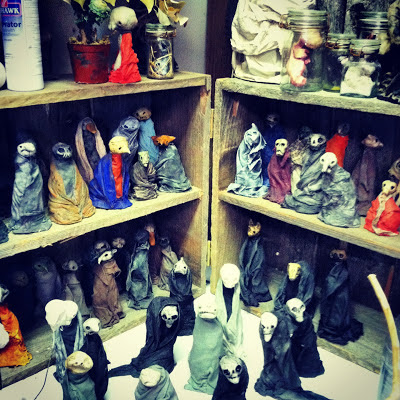 I've managed to go into full production mode, and have decided that I'm taking The Shadow Farm on the road and will be attending Days of the Dead in Indianapolis July 5-7. It has been a long journey for me to get back to the point to where I feel like creating. I am really looking forward to seeing many of the friends I made at DotD last year, and also hoping to make some new friends as well. Thank you all for supporting me thru this last year. It has been a rough ride ( and continues to be).  If you are going to the convention, make sure to stop by my booth and introduce yourself!
Dave
Posted by Dave the Dead at 9:32 AM 5 comments 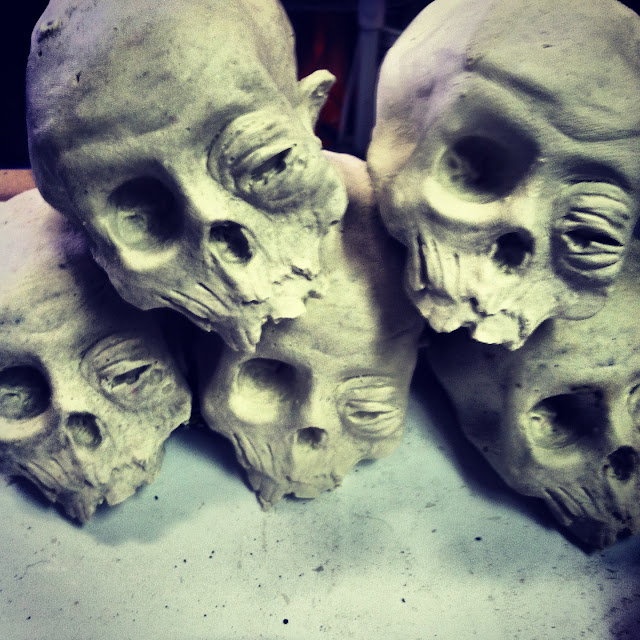 I decided to knock out some duplicates of an old shrunken head sculpt I made many years ago. The mold is done in dragon skin with a plaster outer shell. This particular batch is Plaster of Paris with some very fine paper pulp thrown into the mix. The advantage I have found to this is the final product can be demoulded very quickly ( 10-15 minutes) but dries much lighter in weight than a straight plaster cast. (Complete drying time takes a while..even days....be patient or oven dry on a low heat if you can't wait that long) Just follow the directions for the Plaster of Paris mixture, adding a small amount of very fine paper pulp to the dry mix BEFORE adding any water. Mix the dry ingredients until the paper pulp is fairly dispersed and smooth, then add water, mix well, and pour.  Vibrate the workbench around the wet pour to release any air bubbles. Final pieces can be sealed and painted, used as the base for a new piece, or displayed as-is.
Posted by Dave the Dead at 7:12 AM 3 comments 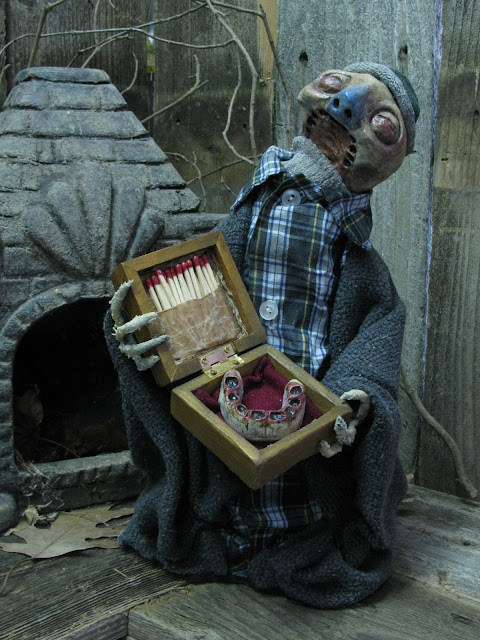 Hershel was the son on a German immigrant. His parents died, leaving him to take over his father's job at the factory making lucifer matches. The work was dirty and unsafe, the hours long, and the pay was poor but it was a job and it payed for a room and board at a local hostel. Hershel had long suffered from an infected tooth in his lower jaw, and due to neglect and the constant exposure to phosphorous fumes in the factory, the infection spread. Eventually, medical care was needed, and unfortunately the whole of his lower jawbone was consumed by the infection. Doctors had no choice but to remove the bone and patch Hershel up the best they could.
* see NYTimes, Feb27, 1865 for the full detail of Hershel's story. 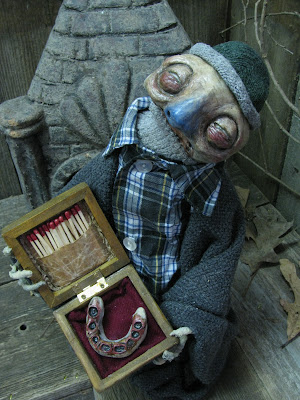 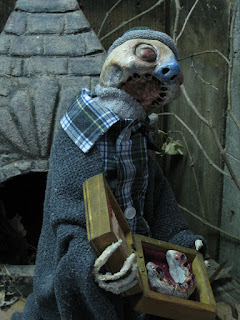 Hershel survived the brutal operation, but was left disfigured and jobless.The only thing left for him to do was beg on the street, selling the very lucifers that had disabled him.

Hello? Does this thing still work?

It has been forever...I know, I know. Tell me I'm a bad Blogger to leave The Shadow Farm in a state of decay for so long...;go ahead, I can take it. Well, here is my return and this time I am going to try to make it stick! I've been working in the shop intermittently , and have actually begun to make some new pieces. The Etsy shop is up and running again after being shut down for way too long. I will be attending Ghoultide Gathering this year, and might just make it out to a few of the horror conventions if all goes well....but let's just take this slow and gather some momentum first, shall we?

So here's some pix of a few of my newest projects just listed on Etsy. 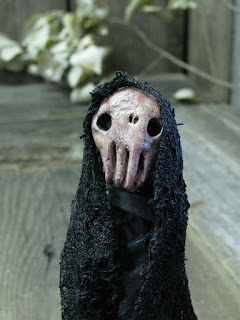 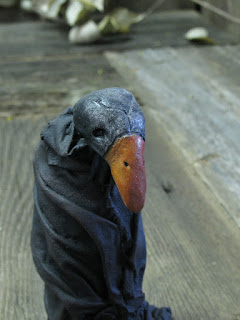